During the games, it’s easy to see how Anton Moore makes Millikan boys’ soccer better. The junior is a skilled attacker with a high work rate and adept at taking on defenders.

What people don’t see is how important he is during training.

“At practice, he’s been expressing his personality a little bit more, which is great,” Millikan first-year coach Jeff Schofield said. “You need guys to keep you hyped up as you get towards the end of the season and practices get a little monotonous. You need guys with that personality to keep things going.”

Moore said he’s tried hard to be a leader in practice by encouraging his teammates as much as possible while outworking them.

“I hate seeing my teammates discouraged,” Moore said. “We’re still kind of a new team so we don’t know how to cope with each other. I just try to bring a lot of energy, motivation and joy. A lot of my teammates have responded really well. We all want to improve.”

Moore added that he feels like he’s become a better player by being more dialed in with his teammates’ feelings and frustrations.

“That’s how you get that connection with them,” Moore said. “They realize that you’re just trying to help them get better and that helps them play better with you. Instead of getting pissed and talking down to them and they don’t want to give you the ball … people just play better when they’re encouraged.”

Millikan needs two wins this week to take back the Moore League championship before starting the CIF Southern Section Division 1 playoffs this month. 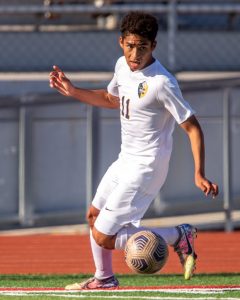 We caught up with Moore to talk about his life on and off the field.

Question: You’re a junior on a team full of seniors and you’re still not afraid to step up and lead with positivity. Where did you learn that from?

Answer: My dad. Growing up when I was playing club and I would make a mistake and the coach would yell at me, after in the car my Dad would say, ‘Don’t listen to him.’ Even when it happened during the game he would yell my name and just look at me. I would understand that I shouldn’t listen to negativity. That’s what I want to be for my teammates so they don’t listen to the hate or down talk. It doesn’t help at all.

Q: You also played other sports while growing up in Long Beach, but why did soccer become your passion?

A: I love the game and I love being on the field. A lot of my problems go away when I’m on the field. That didn’t happen in any other sports… I used to get discouraged when I was younger because kids were better than me. That just motivated me to work harder. That’s just who I am.

Q: What kind of problems are you dealing with?

A: I do have a lot of problems at home. I’m adopted so I have a couple of adopted siblings and it’s just kind of complicated. I’m the second youngest of seven. There’s a lot of mind games. If you think something is unfair it messes with you. You get in trouble for one thing and one of your siblings who isn’t adopted gets off easy. It just messes with you and a lot of things like that have been happening. Recently we’ve been trying to connect with our birth siblings and there’s more complications with that. It’s really stressful. What helps me is being on the pitch. When you find something you love, you put all of your hard work into that.

Q: Obviously you watch a lot of soccer as well, so what is your favorite type of player?

A: I do have an eye for underrated players who don’t get noticed as much. I love watching them play. It’s cool to see people work in silence, you know?

Q: Is that because you see yourself that way?

A: A little bit, but I don’t have that mentality. I let other people decide how they see me. I know my potential but I kind of just stay quiet.

Q: You got some quality Varsity playing time last year as a sophomore, so how have you changed or improved your game?

A: Last year I was more hard working and not as technical because of the coaching style. Schofield is more technical with playing out from the back and taking on defenders. I’ve gotten better at looking to touch with center forwards and outside backs.

Q: Where are your favorite places to eat in Long Beach?

A: I like a lot of fast food. I like (Raising) Cane’s. And Taco Bell. After games I go get two bean and cheese burritos.

Q: What sauce do you go for on your chicken at Cane’s?

Q: What do you like to study in school?

A: I like English a lot. It’s easy for me to read and focus up. I also like anatomy and learning how to take care of myself. You have to take care of yourself when you’re an athlete so that’s good to know.

Q: Do you have a favorite book you’ve had to read for school?

A: I like “The Boxcar Children.” I think that’s a pretty famous old school one. I was home schooled in sixth grade and my mom told me to pick one of the random books that she gave me and I started reading the series because I was so connected. There’s something about learning about other kids’ lives that’s interesting to me. I kind of saw myself in the book because they were just doing their own thing. Me and my siblings are the same, we like going out on adventures.

Q: Do you have a favorite movie?

A: Star Wars and Harry Potter. I don’t know what it is. I could watch them over and over again and never get bored of it. I love how they connect the stories. I kind of follow (the spin off Star Wars shows) that are like the old ones. Some of them are a little bit off but I still enjoy it because it’s Star Wars. I don’t think I could hate on Star Wars ever.

Q: What do you think of the proposed Super League for international club soccer?

A: Money ruins a lot of things. It’s just greedy. Humans are born greedy whether you like it or not, it’s just about how you act on it. Futbol is not made for money. The loss of passion is because of money and kids not being able to play because of money.

Q: Do you like watching the United State Men’s National Team, and what kind of formation would you have them play if you were the coach?

A: I love the U.S. players right now. I think the middle is really stacked with Tyler Adams and Christin Pulisic, so I’d say the original 4-4-2 because there’s so many options. I would also play Sergiño Dest as an outside midfield like (Barcelona FC) has been playing him. He makes really good decisions in the final third and he has insane potential.

Q: Puzzles, love them or hate them?

A: I don’t like them. I don’t have the patience for that. That’s a type of gaming rage where the piece doesn’t fit and you just want to swipe the whole thing off the table.

Q: If you had to sit in the middle seat on a long plane flight who would you want sitting on either side of you?

A: My older brother, Simon. He’s 362 days older than me. We’ve had a ‘ride or die’ type of relationship our whole lives. He used to play soccer at Millikan. I would also pick (teammates Jesus Moreno). He’s really funny. We pick on each other all practice and we can’t get enough of each other. He’s one of the funniest people I know.

Q: If you could travel to anywhere in the world, where would you go?

A: Brazil. There’s a lot of history and passion for futbol there. I loved watching that World Cup. They just love the game and it’s beautiful there.

Ron Beaulac (center, yellow jacket) poses with former players Last weekend, there was a surprise 75th birthday party for Ron Beaulac, which also served as a kind of history of the sport of soccer in Long Beach. Beaulac started the first club soccer team in Long Beach in 1976, a club that competed in the […]

The Saints defeated Oxford Academy 4-2 in the first round of the playoffs. They’ll face either Crean Lutheran or Century on Tuesday in the second round. Support The562.org

Millikan’s preseason schedule presented them with a healthy variety of opponents and challenges. After a one-possession game in the season opener, the Rams suffered a lopsided loss to high-powered Carlsbad before earning a blowout against St. Anthony last week. With La Mirada (3-1) visiting a lively DeHaven Stadium on Friday night, Millikan (1-3) once again […]