Maddie Tadd handled all of her unfinished business this week.

The Wilson senior lost in the Moore League singles final to Jodi Chang from CAMS last year, but Tadd beat Chang in the semifinals at Lakewood High on Tuesday, and then fended off a strong challenge from Millikan sophomore Kailee Mazzeo to win the championship 6-4, 3-6, 10-7 after an intense tiebreaker.

“I’m just so happy I was able to come out on top,” Tadd said. “Last year I lost all of my confidence. This year, even if I lost a few points, I just kept hitting my shots and stayed confident. That really changed it a lot. I just have to stay positive in my mind and not be mean to myself.”

Tadd came into the league tournament of 32 players as the No. 2 seed behind Mazzeo, who went undefeated during the regular season. On Monday both of them got a bye in the first round, won their second round 8-0 in the pro-set format, and then they both won 8-1 in the quarterfinals.

Mazzeo looked strong in her 6-1, 6-2 semifinal defeat of Emma Lim from CAMS, and had almost a half hour to rest while Tadd and Chang battled in their semis. Tadd was able to beat Chang in the regular season and she said that changed her mindset.

“As long as I’m not mad at myself I can play well,” Tadd said. “Last year I lost all of my confidence and I was just lobbing and rallying and she just killed me.”

Tadd learned from her mistakes and beat Chang 6-3, 6-4 to set up the final against the more rested Mazzeo.

“I was really exhausted and (Mazzeo) could tell I was breathing so loud every single point,” Tadd said. “I kept eating my bananas and strawberries and just kept going.”

Instead of playing into Mazzeo’s hands by feeding her hard returns that she could charge at the net, Tadd tried to play a slower game by forcing Mazzeo back to the baseline.

“You have to be really patient because I just want to hit the ball really hard,” Tadd said. “You get so tired too like, ‘I just want the point to be over,’ but you feel so good once you win it.”

After Mazzeo took a 4-2 lead in the first set, Tadd relied on that game plan and a strong first serve to win four consecutive sets for a 6-4 victory. She went 13 consecutive points without making an unforced error.

“Thank God I had my first serve because it let me chill on some points too,” Tadd said. “And keeping (the ball) back because I know if I hit it short she’s just going to attack me and she’s bomb at the net. I just had to keep it (on the baseline) with pace or she would take advantage of it.”

Mazzeo responded with veteran poise in the second set while draining Tadd’s energy my making her move around the court as much as possible.

“I felt like I had been playing her for like two hours,” Tadd said. “I didn’t have anything left in me. I couldn’t do any more. She had me at my wits’ end. She’s such a great player.”

With the second set was tied 3-3, Mazzeo went on an impressive run for three consecutive game victories that included a few strong forehand winners on her way to the 6-3 set win.

Meanwhile, Tadd was also struggling with a cramp in her right hand, but the break between the second set and the 10-point tiebreaker was key to her righting the ship.

“I went off to the side and chugged pickle juice,” Tadd said. “It’s the only thing that I’ve found that works. I chugged it and (the cramp) went away so that was good.”

Wilson coach Nick Medina also went over to encourage Tadd during the break.

“We’ve been working on her mental toughness all year so I didn’t need to say much,” Madina said. “It showed up. You have to practice the same way you play and it’s about body language and a good attitude. Emotion is such a big part of momentum in tennis so we just try to stay even.”

“It felt really good and it gave me a little kicker and I scored like three points after that,” Tadd said. “Whenever I make my first serve I get really happy and my confidence goes way up.”

Tadd took a 4-0 lead in the tiebreak, but again Mazzeo responded with her aggressive style and relentless pressure to pull within one point, 6-5. 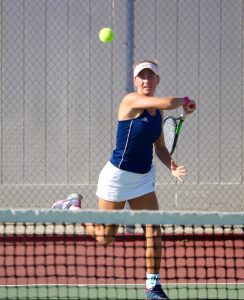 “To drop the first set and come back to force the tiebreak says a lot about a player,” Millikan coach Torie Frapwell said of Mazzeo. “It was awesome to see such a competitive final. It’s exactly what we want to see out here. That’s the point.”

The strategy of keeping Mazzeo on the baseline paid off on the next two tiebreak points as Tadd took an 8-5 lead on unforced errors. The Wilson senior was inch-perfect on a lob shot to force match point, and then won 10-7 on another unforced error.

“That’s by far the best result she’s had against a really good player,” Medina said. “She came out and knew it was going to be tough and did what she had to do to win.”

The Moore League finals are usually hosted at El Dorado Park and Billie Jean King Courts, but the abbreviated season and COVID concerns forced the league to move the tournaments to Lakewood High.

“It’s a crazy situation right now,” Frapwell said. “It’s a lot of intensity and pressure and everyone is feeling it. I’m happy with the way this turned out. It’s been kind of nuts, but it’s been a year of nuts, right?”

The Moore League’s best sport this fall has been girls’ tennis, where Long Beach Poly (23-0) and Wilson (20-2) are both highly-ranked in their CIF-SS divisions and where both will be playing in semifinals this afternoon. The Jackrabbits are fresh off a 17-1 drumming of Great Oak in the quarters and will host La Canada […]