The first years of youth soccer are lovingly referred to as “bumblebee ball” because the young players don’t yet have the discipline to stay in their positions. Instead, they all run around following the ball like a swarm of bees.

Jalen Neal never played soccer like that. The Long Beach native started in a local league when he was 3 years old, and as a defender he already knew how to kick the ball back to the goalkeeper to maintain possession and build an attack.

“The other parents would yell that he was going the wrong way,” Jalen’s mom, Sara, said. “I had to tell them he was doing it right… He already got the fundamentals of the game.”

Neal, 17, has been impressing everyone with his composure and intelligence ever since as an elite central defender. He’s played with FC Long Beach and the Los Angeles Galaxy academy over the last few years and fulfilled a lifelong goal last week when he signed a first-team contract with the Galaxy.

“There’s not a lot of center backs in this country whose main attribute is having the ball at their feet and being able to play out of the back and relying on their intelligence of the game to defend,” Neal said about why he thinks he got the contract offer so young. “I think a lot of defenders rely on their physical attributes and for me that’s not something I rely on the most. I just bring other attributes that not a lot of other center backs have.”

“Jalen is a talented defender who has shown his capability at the professional level last season with LA Galaxy II,” LA Galaxy General Manager Dennis te Kloese said in an official statement. “We are excited that he will become another player on our first-team roster that has come through our developmental system. We look forward to Jalen continuing to learn and grow with our club.”

Neal, who is 6’2” and 160 pounds, said he needs to keep getting bigger, faster and stronger in order to reach his ultimate goal of playing professionally overseas where recently young United States products have been shining in multiple leagues. Neal said he’s been watching the highlights almost every day.

“I thought (watching soccer) was boring (when I was younger), but as I kept playing and the level kept getting higher that I was playing myself, I understood more how hard the game is and I appreciated the game more so it’s gotten more and more fun to watch throughout the years,” Neal said. “I like possession-based style and short passes.”

For that style to be successful, it takes selfless play across the field, and that comes naturally for Neal. In his free time, he volunteers for Care Closet in Long Beach, which distributes things like sleeping bags, clothes and shoes.

“I like giving,” Neal said. “That’s a big part of why I was so happy to sign the contract. For birthdays and holidays I couldn’t give out any presents because I didn’t have any money. The fact I can provide and give out presents… Just a small thing like that really makes me happy.”

“He’s older than 17,” said Duke Givens, who created the Care Closet last year. “He’s a very mature, responsible and caring young man. He cares about his community, is a pleasure to work with. He’s a tender soul and we need a lot more Jalens in the world.”

Neal was born in Long Beach, but his family moved to Lakewood where he and his three siblings all played multiple sports. For Neal, soccer gave him an opportunity to compete without having to get out of his comfort zone.

“Coaches used to ask if he enjoyed the game because he wouldn’t show emotion,” Sara said. “It was always the same answer, ‘He has a job to do.’ He’s excited when they win and upset when they lose but during the game he’s focused and shows zero emotion.”

“I wouldn’t say I’m shy but I tend to keep to myself a lot,” Neal said. “With anything in life I never really wanted all of the attention and glory on me. I guess I just wanted to do the work that wasn’t being seen by many people.”

His personality has been a perfect fit to play center back as the anchor of the defensive back line. Neal said he’s never wanted to play a different position.

“I’ve always liked stopping teams from scoring goals and then getting it up the field for other people to score our goals,” Neal said. “I stared out as a defender and still am.” 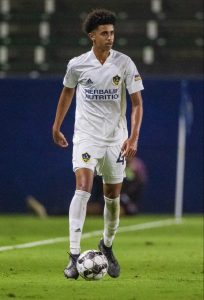 The decision to move Neal from the local AYSO league to a club like FC Long Beach wasn’t an easy one for Sara — who is a single mom working at Long Beach City College. However, a free clinic gave the FC Long Beach coaches a chance to convince her that Neal had something special. He started quickly after that as a 5-year-old playing with 8-year-olds. Sara said she never worried about his safety, or how he would fit in.

“I’ve never worried about him,” Sara added. “He was my easiest kid and always has been. He’s very focused and calm. That also translates into his soccer. His coaches’ favorite thing about him has been how level headed and calm he is.”

In 2016, Neal was contacted by the Galaxy academy. That got him on the national soccer radar and since then he’s also made 69 total appearances in the U.S. Soccer Developmental Academy. He’s even played for U.S. Youth National U16 team.

With no desire to play for the team at Mayfair High, Neal dedicated himself to improving with the Galaxy — which meant his family needed to make changes to their own lives as well with long, late drives to practice.

“It was a sacrifice, but one that we all decided was worth it,” Sara said. “It happened fast, but I knew it would happen for sure.”

Neal still plans on attending online college where he wants to study kinesiology.

Long Beach Poly’s girls’ soccer team had already had a magical postseason run, and the Jackrabbits were leading 1-0 at halftime, just 40 minutes away from earning a spot in the CIF State Division 2 championship on Saturday. But a wild second half got away from Poly on the road at Mira Costa, and they […]

The Jaguars made more history on Thursday and we’ve got some great action shots from our own Stephen Dachman.

Wilson girls’ soccer rolled to a 6-0 win at Jordan on Thursday and here are some great action shots from Stephen Dachman.