It’s been years since a local product was consistently producing for Long Beach State men’s basketball, but Jadon Jones is trying to buck that trend.

Jones led St. Anthony High to the CIF-SS Open Division playoffs as a senior last year, and already made his first start for LBSU last weekend. In just the fourth game of this abbreviated season the 6’5” 170-pound freshman guard scored 16 points during the win over CSU Bakersfield at Walter Pyramid.

“We really didn’t need another wing, but we needed somebody who was a baller,” LBSU coach Dan Monson said of recruiting Jones. “He fit into what I want our young guys to look and act like.”

Jones plays with an aggressive passion and unwavering confidence on both ends of the floor that’s reminiscent of many Long Beach basketball products who’ve come before him. One of them is his father, Derek, who played at Millikan High and Cal State Fullerton in the 1980s.

“(Jadon) is a chip off the old block and we put in a lot of time,” Derek said. “To see his hard work pay off a little bit does a dad good. I’m extremely proud and happy for him.”

Jones was born and raised in Long Beach and Lakewood, where he fell in love with basketball because of his dad — who doubled as his coach.

“My dad always pushed me playing 1-on-1 and I’d always try to beat him,” Jones said. “I kind of just wanted to be like my dad. He taught me pretty much everything I know and every aspect of the game. He’s a coach so he’s very good at breaking down things and telling me what I’ve done wrong and right.”

In his playing days, Derek was a long big man with range so most of his lessons were about footwork and balance. Jones said that’s probably why he’s such a good shooter with his unorthodox lefty stroke.

“Everything that I got was learned through trial and error,” Derek said. “(Jadon) was born with a lot of the gifts, and I just needed to fine-tune it. When I first got him started at 5, I knew he had a little something special and something different. He just needed dad’s touch and some of the knowledge I have from years playing at different levels.”

Some of that knowledge came from the street ball games Derek played growing up less than a block from Long Beach Poly High. Some of it also came from being on the streets.

In 1987 when Derek was about to start his senior year at Fullerton, he had to come home for a weekend while his apartment was being painted. That Sunday night he was on the sidewalk with some friends when a stranger approached them. There was a fight between him and Derek’s friends, and the stranger returned later with a gun and shot Derek in the arm.

Derek said he woke up from a coma because he thought he was late for basketball practice. After a few days on life-support, and a month in the hospital, he had to relearn the game of basketball because the gunshot caused nerve damage in his arm and shooting hand.

That trauma weighted heavily on Derek’s mind when deciding where to send his son for high school, even though he was coaching at Wilson High at the time.

Jones had made a name for himself on the Under Armor circuit while playing travel ball, and had a few schools interested in his services. Instead of keeping him in the Long Beach Unified School District, Derek sent his son to Cantwell-Sacred Heart of Mary — a private school in Montebello.

“We all know people who were shot, injured or caught up in things they shouldn’t be just because of the area (I grew up),” Derek said. “We got our kids as far away from that as we could to protect them. It’s cool to be outside when you don’t have to worry about who your friends are and cars riding by. They grew up differently.”

Jones said he enjoyed his time at Cantwell playing for demanding coach George Zedan, but a coaching change had him looking for a new school after his sophomore season. That’s when he met St. Anthony coach Allen Caveness at a summer league game. Jones hadn’t played well in a game, but Caveness still took time to pick up his spirits and give some advice.

“Just him taking time out of his day to come talk to me and cheer me up after a bad game showed me a lot,” Jones said.

Caveness and Derek Jones had played against each other for years in the Drew League — Derek playing for Long Beach and Caveness playing for Inglewood — but he didn’t know Jadon was his son when they met in 2017.

“I knew it would be good for him,” Caveness said of Jones playing in Long Beach. “His mom and dad are at every game. Derek would even help out at our practices and work with the bigs. The concept of family is important for him.”

“Once he was at that stage of his life, he was used to a different surrounding and type of friends,” Derek said of keeping Jones in a private school. “No disrespect to (Poly) but he’s just associated himself with different kinds of people. (St. Anthony) was where he was most comfortable.”

Jones was a team captain last year at St. Anthony where he averaged 19 points, six rebounds and four assists per game. The Saints had one of their most successful basketball seasons in history as they won a league title and reached the top division postseason. Jones scored 24 points in his final playoff game.

“It’s probably one of the funnest years of basketball I’ve ever played,” Jones said. “I learned so much. I got to be a leader and everyone wants to be that guy who takes the last shot who is responsible and I got that opportunity on a good team. (Caveness) is an amazing coach. Not only that, he’s also an amazing friend and mentor. I still call him and pray with him before the games. It was a family over there and I love those guys and I’m grateful for the great experience.”

Monson said that his respect for St. Anthony’s program and Caveness peeked his interest in Jones.

“He’s from a winning program and his coach said he’s a winner,” Monson said. “I think we’re trying to get our culture back and getting guys who have that as a priority as a person.” 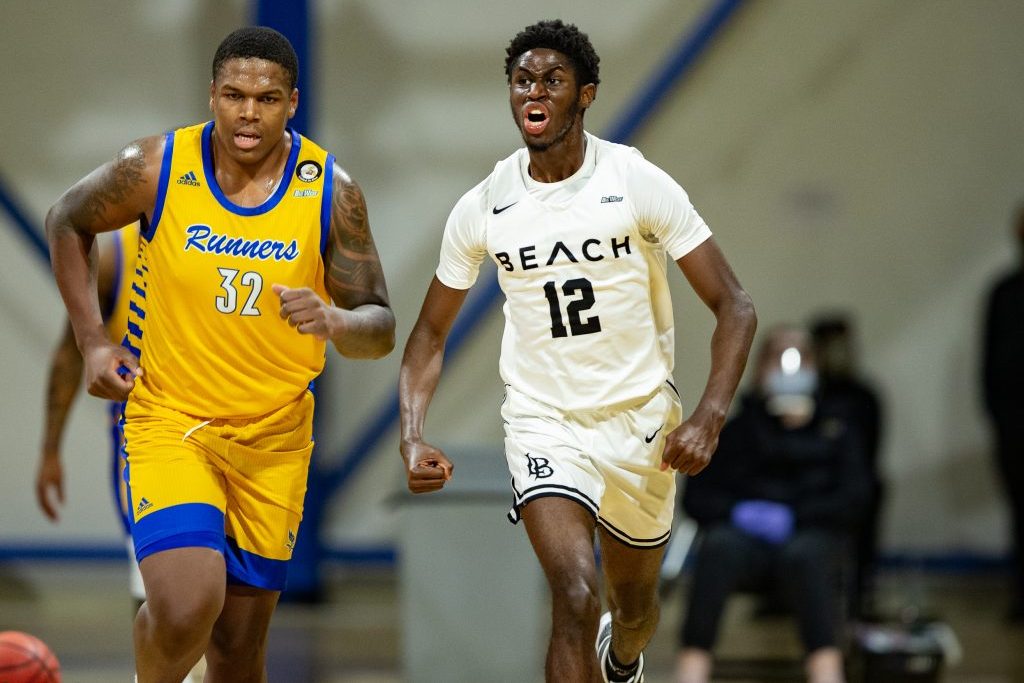 His own tight-knit family was one of the biggest reasons Jones chose to attend LBSU.

“It’s home and it didn’t feel right going anywhere else,” Jones said. “I love it here. Why not go somewhere where I can have my family down the street?”

Jones had played only a few minutes before starting the Big West Conference opener last weekend because of injuries.

“I wasn’t nervous,” Jones said. “We do a good job of pushing each other every day at practice. I’ve playing basketball my whole life and it got me here, so I was well equipped to play.”

The Beach only had nine players available, but Jones sparked his team with a pair of 3-pointers and a highlight dunk in the first half of the victory.

“He was just kind of the next man up,” Monson said. “Did I know he was ready, or did he earn it? I don’t know about any of that. But it was his opportunity and what he did is took advantage of it and stepped up and fit in. I was really proud of that.”

Jones said his dad, mom Stephanie and older bother Joel were all outside Walter Pyramid waiting for him after the game.

“He didn’t say anything,” Derek said. “I opened the door and he was staring there with the biggest smile on his face. He gave me the biggest hug and wouldn’t let go. My mom was in the background looking at us about to cry. They were so excited for me. I got so many messages after. It was a great family moment.”

“He’s still got a lot to learn but it’s exciting to watch how far he’s come with his consistent progression,” Derek said. “And to see him have a good time… I can’t tell you anything better. I just sit there with pride as I watch him do his thing.”

This week on the show we’re giving you everything you need to know about the 2019 Long Beach high school football season and what to watch for this weekend. 03:00 Question O’ The Week: What game are you covering this week? 04:45 Game O’ The Week: Wilson vs. Mayfair at Bellflower HS on Thursday 06:20 […]