Millions of baseball fans across Southern California are rooting for the Dodgers as they try to win their first World Series since 1988—perhaps none louder than Long Beach’s Ford family.

The Fords lost the patriarch of their family, Bruce, last November. The longtime Long Beach Port operating engineer’s unexpected passing devastated his wife and five children, all of whom have been gaining some solace as they’ve gathered to watch Dodgers games this season, something they’ve enjoyed doing as a family for as long as they’ve been a family.

“We think about it every year, we say they’re going to win every year, my whole life,” said Cameron Ford, one of Bruce’s three sons. “We need it this year.”

Bruce was born in 1960, the year the Dodgers moved to Los Angeles, and he was a diehard fan of the team his whole life. Growing up on the Westside of Long Beach on Easy Ave, playing baseball with his neighborhood friends (including the famed Gwynn brothers), baseball was a huge part of Bruce’s life. It was a love he shared with his family—something he almost had to do, given the cosmic timing that Bruce and Anna Ford’s first child, Bruce Jr., was born in 1988, the last time the Dodgers won the title.

Because of the size of the family, Bruce, Anna, Bruce Jr., Lucy, James, Cameron, and Emi didn’t often all get to go to games together. “We always had pieces of us at five to ten games each year, the family was too big,” said Cameron. “Lucy got engaged at Dodger Stadium, that was with the whole family except for me because I had to work.”

The Fords decided that this year, they’d pay a special tribute to Bruce’s memory during this strange baseball season, which has seen their beloved Dodgers make history. The family pooled their money and purchased a photo cutout of Bruce for Dodger Stadium, so that he’d have a great seat behind home plate to watch the spectator-less season. The Dodgers set a new franchise record for winning percentage in the shortened season with a 43-17 mark.

It wasn’t the first time the family gifted Bruce a seat at Dodger Stadium, as Father’s Day and birthday games had become a tradition for them. But the seat in the section right behind home plate was new territory.

“Best seat we ever got him,” said Cameron.

The family has also been gathering at Bruce’s mother’s house in Carson to watch Dodger games together, reserving Bruce’s favorite chair for a framed photo of him. The mini-family reunions include Lucy’s husband James and other members of the family—and they’ve been a great way for Bruce’s loved ones to heal around the familiar comfort of watching the Dodgers.

“It’s our tradition, there are car flags and everything,” said Cameron. “The hardest part of losing my dad was going over to my grandma’s house and telling her—that was a rough night. She was very strong about it, she was going through chemo at the time. Now, all of us being over there to eat and watch the game and relax together, it feels good.” 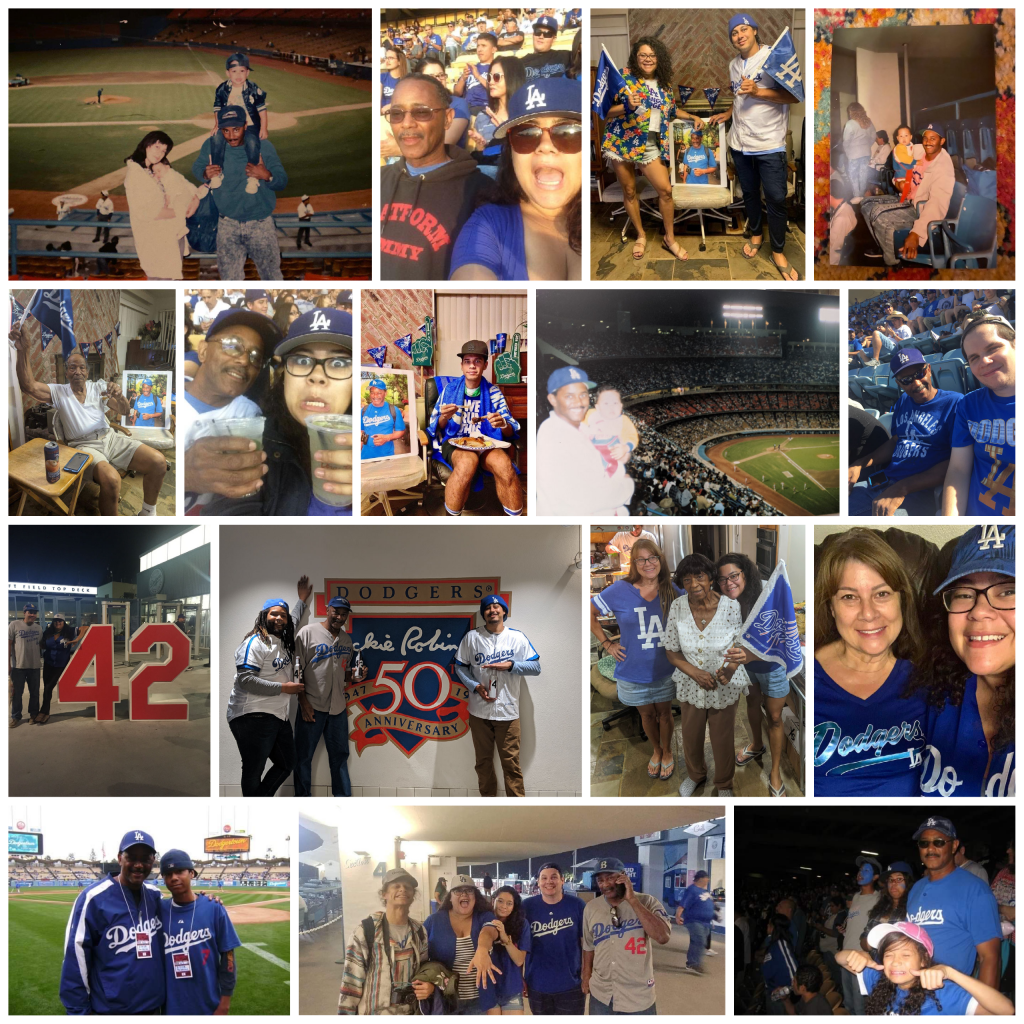 Cameron said that in addition to keeping the family tradition alive, he feels like he’s been able to continue his individual relationship with his father through the Dodgers’ run as well.

“The last text he sent me was about how the Houston Astros were ‘fucking cheaters,’” said Cameron with a laugh. “He was a big critic of Dave Roberts’ the last few years and they were starting to try to trade for Mookie when he passed away so all those storylines have kept going.”

Before the Dodgers won Game 7 of the NLCS against the Braves, Cameron visited his father’s grave in Long Beach to sit for a few minutes and talk through the game with him.

“It was emotional being there,” he said. “The conversation wasn’t too long, just like how we’d talk. It was just, ‘Let’s get this shit done.’”

He left behind a “Go Dodgers” flag planted in the grass, then went to join the rest of the family to watch them win.

Happy summer and welcome to our All Baseball episode full of the latest news from local boys in the pros and interviews from the Dirtbags press conference last week. 03:40 Chris “Bat Flip” Betts Wins Home Run Derby, Plus Other “LB In MLB” News 18:00 Meet The New Dirtbags Coach (Interviews With Eric Valenzuela, Andy […]

Kenny Barnabee learned how to play soccer in China, and now he’s back stateside trying to help Long Beach Poly win its first Moore League title in 15 years. “It’s an experience that not many people get to have, and an experience I won’t ever forget,” Barnabee said. “I lived in China. Who would’ve thought? […]

REPORT FROM LBSU SPORTS INFORMATION DEPARTMENT The Dirtbags (2-13) looked to knock off the No. 2 UCLA Bruins (12-3) on Tuesday night on Bohl Diamond at Blair Field, but the offense couldn’t do enough to support the pitching staff in a 2-0 loss. A total of 12 pitchers were used, with seven for UCLA and […]