On the last Saturday before the start of the 2020-21 school year, families from across Long Beach and surrounding communities lined up at 7 a.m., surrounding the Christ Chapel of Long Beach a few blocks west of Wilson High School. Like so many families across the country, they were in need of a helping hand during an unprecedented health crisis and economic downturn.

I-Own-It.Today, a local non-profit, had a team of volunteers at the church handing out free backpacks and groceries to the community. The organization was established six years ago by co-founders Jessie Haase and Debbie Lambert, with a mission to “offer goods and services to support homeless and struggling families.” The scope of I-Own-It.Today’s events has grown steadily over the years, from 50 backpacks at the first giveaway five years ago, up to 500 backpacks available for pickup last Saturday.

“Leadership is key, and that’s where I-Own-It came from. It means Individual Outreach Working Network,” Haase explained. “It’s truly a network of volunteers.”

Lambert has been a long-time girls’ basketball coach around the Moore League, with previous stops at Compton and Cabrillo. She is currently the head JV coach at Wilson, and has stressed the importance of community involvement with her players.

“We think it’s important for the youth to be able to give back,” Lambert said. “And to be in person and engage with someone. There’s always someone out there who’s going to need services, so we want to empower the youth of our community in particular to give back and be of service. That’s the whole premise–leadership promoting community through volunteerism.”

During the event, Lambert was spotted by one of her former players who had stopped by the event with her family. Lambert said that as a coach, she has consistently encouraged her athletes to participate in these kinds of events in order to gain a different perspective not only of their community, but of their own lives.

“In athletics there’s a certain amount of leadership that needs to happen in order for a team to function, as well as being a role player,” Lambert said. “We encourage athletes to come give back. You think you’ve got it rough playing sports, but at least you CAN play sports. Some individuals your age are home watching their siblings or have to work to support their family. So it’s just that community awareness–look at another person’s predicament and you might be a little more grateful for your situation.” 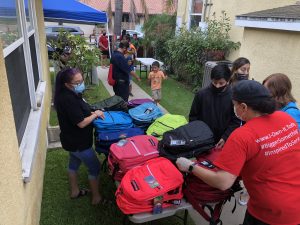 The organization typically holds one event per month, but has been shut down since February due to the coronavirus. During the “even” months of the year, I-Own-It.Today usually hosts a Fellowship Fair, where families can come by for food and clothing, and children can receive medical care from nurses and dentists at no cost. During the “odd” months of the year, the organization focuses on helping the homeless population with necessities like food, clothing, and toiletries.

According to Haase, the waiting period during the shutdown was frustrating, but there was always an eye on returning as soon as possible.

“Each day that went by, the conversation was, every time, ‘We’ve got to figure out a way to do this,” Haase said. “We just had to take a few steps back, realize what was most important and what we could pare down, and then figure out how we could keep everyone distanced apart outside, including the volunteers, to keep everyone safe.”

During the giveaway, all foot traffic flowed in one direction, and was staggered to limit overcrowding. As families walked to the entrance, they were greeted by a volunteer at the entrance who gathered some basic information and had them fill out a COVID-19 survey. From there, the families moved through the church’s courtyard where children got their choice of several different colors of backpacks. Families were then able to grab some fresh produce and non-perishable groceries before making their way back outside the church grounds.

Now that the organization is back serving the community, Haase and Lambert are committed to keep events going in the months ahead. Though they’ll still need to have modifications in place due to current health orders, plans are already underway for another backpack giveaway at the midway point of the school year along with more events to help feed and clothe those in need.

“These are people in the community you maybe haven’t seen because you live in certain parts of Long Beach, and this gives you that appreciation,” Lambert said. “You get to meet these interesting people and be exposed to different cultures. That exposure gives you appreciation that we’re all in this together.”

The world’s biggest sporting event has officially been rescheduled, as the International Olympic Committee announced the revised dates for the Tokyo 2020 Games on Monday. It was announced last week that the 2020 Olympics would not begin as scheduled this July, due to the global spread of the COVID-19 virus. After a few days of […]

On this episode we’re talking about what it’s like to be a teacher and a parent as the Long Beach School District starts the digital school year. We also catch up with Long Beach Poly junior outside hitter/setter Adonia Yandall Faumuina after her verbal commitment to USC that she announced at The562.org 02:00 We’ve Got […]