Millikan wrestling has been one of the most successful teams in Long Beach over the last decade. Like most elite high school athletic programs, the Rams and 28-year coach Marshall Thompson have built on their own legacy and lineage.

Thomson’s sons, Trevor and Sean, are two of a handful of current Rams who are wrestling siblings. He also said that bringing back alums to coach has solidified his lessons.

Last week, a dominant 57-13 win at Lakewood clinched Millikan wrestling its eighth consecutive Moore League team title. The Rams won their second CIF title in 2010, and Thompson thinks that the key to sustained success is running the program year-around as one unit.

“That tradition and mentality is built in, and that becomes what they believe,” Thompson said. “We support each other, we work out together and we look at it as one team. That formula works for us.”

The Rams once again won five league meets by a large margin this season, and is finishing the regular season on a high note despite not having their full lineup available. However, Thompson said that top junior heavyweight Edwin Samayoa and others will be back from injury and ready for the postseason.

Lakewood High is hosting CIF Southern Section boys’ team dual meet on Saturday while the girls compete for the Moore League individual titles at Poly. The boys will wrestle for the league belts on Jan. 31 at Wilson, and both boys and girls will compete for the CIF-SS individual championships on Feb. 8-9.

Last week in the regular season finale at Lakewood, Millikan’s Diego Laverde, Trevor Thompson, Robert Pallares, Kydyn Lima, Jacob Zavala, Johnnie Grover, Nathan Munoz and Alan Patino all won via pin. Patino is another Ram who was introduced to wrestling by his older brother, Leo, who was All-Moore League at Millikan.

“My brother bought me mats and equipment and he paid for most of my classes,” Patino said. “I feel like wrestling really changed me because I used to be really chubby. When I was a fat kid and I played video games a lot. Wrestling taught me how to be more self disciplined and work hard. I feel like after wrestling everything in life is much easier. It’s a lifestyle.”

That lifestyle included cross country running, jiu-jitsu training and healthy eating that involves a lot of chicken salad with no dressing. Patino said he weighed 160 pounds when he started wrestling in fifth grade, and after a growth spurt in middle school, the junior has wrestled at 132 pounds at Millikan. His 5’11” frame causes problems for his opponents, and Thompson said that with more than 20 pins this season, he’s one of the most consistent Rams on the mat.

“A good word to describe his style is unorthodox,” Thompson said of Patino. “He does things the way we teach them, but he puts his own little flair to it. Other wrestlers don’t really know where he’s coming from, and he gets after them.”

Patino grew up in North Long Beach, and has been taking a public bus to school and wrestling practice every day for the last three years. He even trains at Jordan High during the summer.

A broken finger derailed Patino’s freshman year at Millikan, and he got sick during his sophomore year because he was using unhealthy methods to cut weight.

“I had some bad habits like taking laxative, supplements or just not eating,” Patino said. “My coaches helped by giving advice and educating me on water weight.”

With a healthier body and more experience than most of his opponents, Patino hopes to reach CIF Masters this season. He won his weight class at the San Yanez tournament earlier this month. 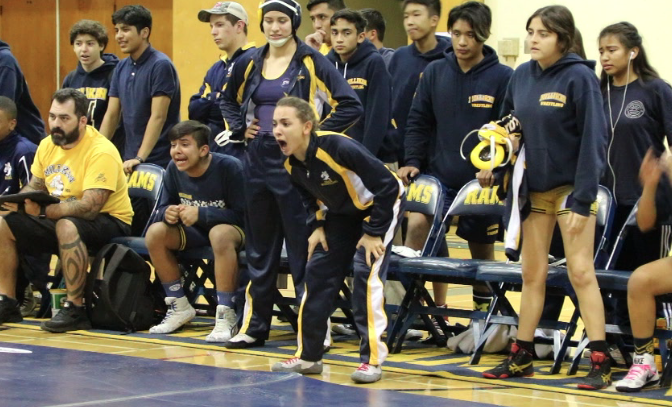 The Millikan girls also won the league title again this year, and they also have Ram lineage in 101-pound sophomore Peyton Roberts. Her brother, Jason, and step dad, Blake, both wrestled at Millikan.

Roberts didn’t develop any specific interests while growing up on Oahu, Hawaii. She said she tried things like gymnastics, drill team and soccer, but would move on to the next activity after just a few months. Everything changed when her family moved to Long Beach five years ago and she saw her bother wrestle for Millikan.

“I was in awe,” Roberts remembers. “Seeing my brother wrestle inspired me to stick with a sport and want to be better at it. When I was younger I didn’t understand commitment and my parents never forced anything on me. But wrestling just got me.”

Roberts said that she struggled on the mat at first, but technique and muscle memory helped her overcome any lack of physical strength.

“During a match I don’t think a lot,” Roberts said. “I don’t feel like I’m there. It’s just all in my head and it comes out naturally.”

Roberts is the favorite to win the Moore League 101-pound title, but she’s also an important part of the Millikan program. She will stay after to help keep score for the boys duals, is one of the most vocal and passionate teammates during other matches.

“In fact, sometimes we have to calm her down a little,” Thompson said. “She’s one of our best wrestlers. She’s pretty aggressive and has really good balance. When she gets on top, it’s really hard for the other wrestler to get out from underneath.”

Roberts said that her independent spirit has suited her well on the mat, and in her studies to become a nurse.

“I don’t see myself as a girl on this team,” Roberts said. “I’m a wrestler and that’s it. I don’t like to put on makeup. Wrestlers are so different from everyone else. So independent and strong. That’s what I want to be.”

We’ve got some great shots from the Lakewood win by photographer Stephen Dachman.

Congratulations to our Athletes of the Week and thanks to Naples Rib Company for their sponsorship. HIGH SCHOOL Trevor Thompson, Millikan Wrestling Coach’s son Trevor Thompson knows plenty about Millikan’s wrestling legacy, and the junior added his own name to that history at the Moore League Finals on Saturday. Thompson won his third consecutive league […]