The Millikan boys’ and girls’ wrestling teams are the favorites to repeat as league champions because they’ve done it every year since 2011, but this season’s title chases could be closer than ever.

After a few defending league champions left the program in the offseason, the Millikan Rams only have four total returning All-Moore League wrestlers. Even Millikan 28-year coach Marshall Thompson doesn’t know what to expect.

“I wish I knew more about the other schools,” Thompson said. “As of right now I couldn’t tell you who will be the strongest team.”

Thompson’s sons Trevor and Sean will be two of Millikan’s returning league champions alongside junior heavyweight Edwin Samayoa. On the girls’ side, Isabella Moreno is the only returner with a league title under her belt.

“You have to work year-around,” Marshall said of his sustained success. “That doesn’t mean all the kids are working the whole time, but we keep the program available for the kids to practice 11 months out of the year. That tradition and mentality is built in, and that becomes what they believe.”

Meanwhile, both teams from Wilson and Poly have been steadily improving for the last few years, and hope they have a chance to upset the Rams. Wilson is scheduled to host Millikan tonight at 5 in the league opener. The Bruins finished second last year.

“It’s not ideal,” Wilson coach Seth Wegter said of facing Millikan so early. “At the same time we’ll see where we’re at. I’m not stressed, I’m just enjoying the fact that I have a really good team of good kids. Beyond the talent, they’re just good people.”

Senior Marcos Nottingham leads a strong middleweight group for Wilson as a defending league champion. Andrew Rendon and Ryan Catbagan, who both finished second in league last year, will also be key to the Bruins success.

Wegter said his girls’ team has made a lot of improvements, and showed how far they’ve come by finishing top-10 in a tournament at Capo Valley last month. Senior Maryhan Farag and her sister junior Sandra Farag are both team leaders and heavyweights. Evelyn Enrriquez-Ramos leads the middleweights, and sophomore Gracie Kirazian in an emerging lightweight.

Poly is starting a new era under first-year head coach Kenneth Lee after an eventful season last year. The boys’ team finished third in league, and the girls’ team had its CIF postseason cut short due to a paperwork error.

Lee wrestled at Downey High, and has been coaching the lower levels at Poly since 2012. That familiarity allowed Lee to completely fill out his roster with 12 returners before the season started. Senior captain Chang Lo is a key at the lower weights after finishing seventh in CIF last year. Fellow seniors Josh Norvell and Andres De Los Santos (pictured) also finished second in league last year.

Poly senior captains Lili Rojas, Melanie Ortiz and Christian Jane Yuson are the leaders on the girls’ team that has unfinished business in the postseason.

“The girls are super hungry after last year,” Lee said. “They’ve kicked it into a new gear and it’s been amazing. I’m really excited to see what they do this year.”

Senior Kyle O’Campo is trying to fill that leadership role at 132 pounds after reaching CIF Masters last season. Junior Tim Nou was a match away from placing at CIF last year.

“The measuring stick is always going to be Millikan,” Gonzalez Sr. said. “I like what we have. It’s a group of good kids. We might not be the meanest on the block, but we’ll be the toughest on the block.”

Cabrillo and the combined team from Jordan/Compton also have some exciting young talent. The Jaguars will be led by sophomores Victor Lonbera (120 lbs) and Kenneth Mendoza (195 lbs) this season. 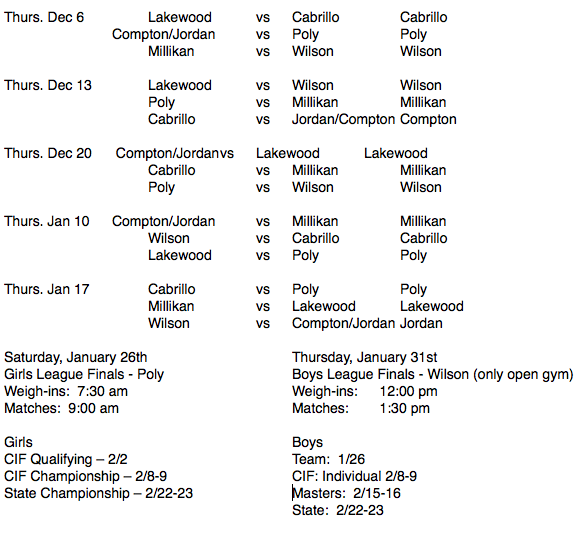 The Wilson Bruins are coming off of their most successful season in a decade under third-year coach James Boykin, and have the talented returning backcourt to make some noise again. “We obviously want to improve on last year but with a new group, there’s always new challenges,” Boykin said. “I’m excited to see if this […]

The562’s high school baseball and softball coverage for the 2022 season is sponsored by LBUSD Board of Education Member Megan Kerr. Here are on the updated Moore League standings after the first round of league play. Millikan, Lakewood and Wilson all picked up Moore League wins Tuesday.